The ExerCube: Participatory Design of an Immersive Fitness Game Environment

This work described the research-based co-design process of the early stage ExerCube prototype and presents a first exploratory testing of the general idea and mechanics of the system. 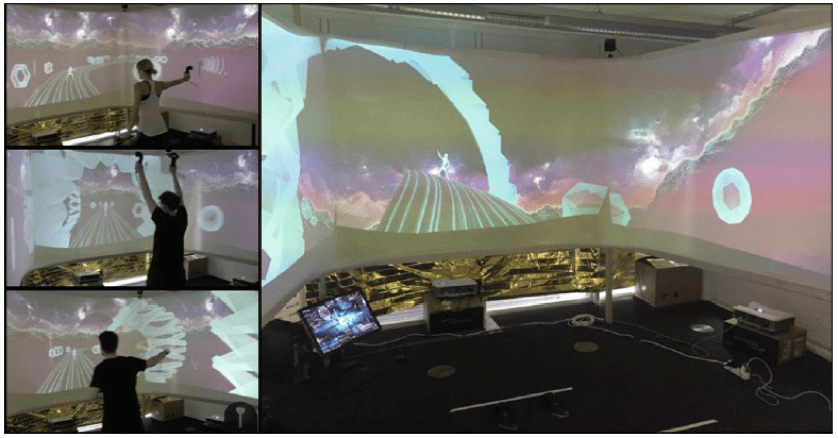 ABSTRACT: Exergames have advanced from a trend of the entertainment industry to serious training applications. Nowadays body-centered games can be played at home, as well as in the gym, and provide an effective and motivating workout experience for the player.

Consequently, existing systems exhibit weaknesses like motion sickness or a lack of audio-visual and narrative design of the physical and virtual play space. As such, the player’s game experiences remain limited. Our work contributes to the sustainable establishment of fitness games as effective and attractive training tools.

In this paper, we introduce the “ExerCube” and the design, evaluation, and subsequent re-design of the early stage prototype. The “ExerCube” is a fitness game setting for adults, which affords immersive gameplay experiences while engaging in a playful motor-cognitive and -coordinative functional workout.

Our findings show that the preliminary “ExerCube” prototype was usable and well received by the target audience. We report insights about the target audience’s preferences and identify avenues for the implementation of dual flow-based game mechanics, the optimization of the training concept and hardware, as well as for the further development of the game scenario.